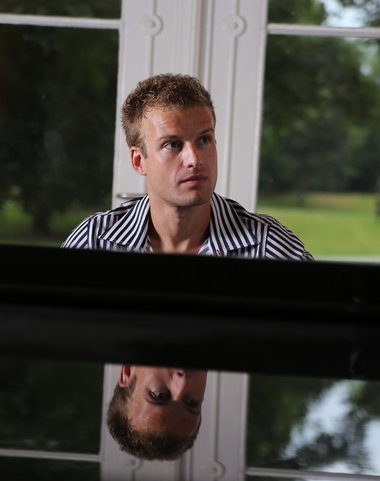 Sven was born and raised in 1987 in Detmold (West-Germany) . At the age of ten, he fell in love with the piano. This love should continue and evolve while studying music theory and composition at the Johannes Brahms Schule in Detmold.

From 2008 to 2014 he continued his studies at the conservatory of music in Detmold as well as galloroman studies at the university of Paderborn and Toulouse.

Apart from this passion writing film scores, he composed a multi-part dance suite in honour of the lippische Sportgala in 2011 in the Lipperlandhalle where around 100 dancers performed african inspired dances.

Beside his work for media productions, he dedicates himself writing folkloristic compositions for the Trio Estate founded in 2011 (Andreas Henrichmann, Maria Behrens) in the style of yiddish traditions. His first suite was called Shalom aleihem.

In 2016 he worked as a pianist for AIDA cruises before dedicating himself as a music teacher, composer and music supervisor till now.

In autumn 2021 the German feature Aprilttage as well as Auf der Straße nach Caen by director Valentin Hilker is waiting to be scored.

Sven writes in a wide range of styles, from larger orchestral symphonic scores sometimes accompaigned by choir down to smaller chamber ensembles and also intersperses electronics and hybrid or bespoke sounds with live solo instruments.

"the Arctic" releasing in February

- Classical album "By the end of daylight" releasing in June 2021

"A musical journey to the unknown of human desire"

- The German feature Apriltage is waiting to be scored in autumn .